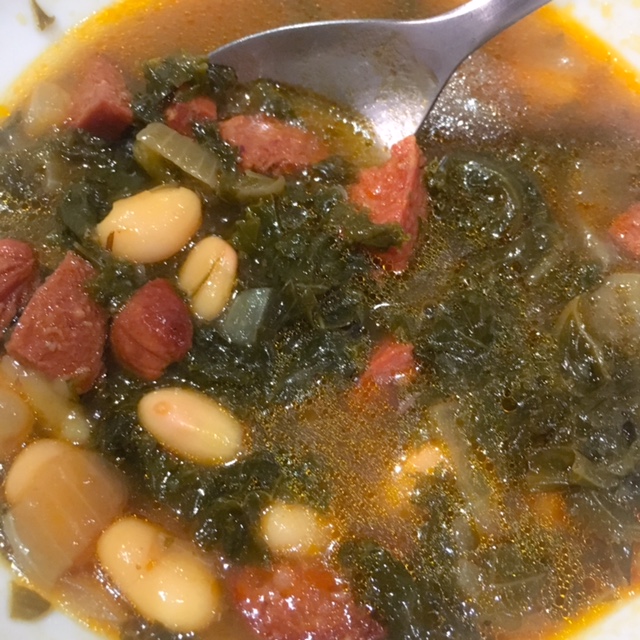 I had a bag of kale this week to use up, so I thought I’d make soup. I’m not the biggest fan of kale on its own, but find it a really good addition to soups, as it is such a hearty green that it stands up to hot broths, maintaining its texture and color. Also, I have been feeling an energy lull lately so figured a good, hearty nutritious broth would perk me up… maybe it’s in my head, but a good broth usually does seem to do the trick. Getting my bearings here in Maui still, I tried out a new grocery store in search of beef bones and some type of salty meat to add to the soup. I was pleasantly surprised to find this particular store sold their own fresh chorizo in the meat case at a very reasonable cost, and I also found a hefty bag of beef bones in the freezer aisle for pretty cheap, too. So I left the store carrying my huge bag of bones, probably looking like some kind of crazy person. I am a huge advocate of bone broth and am a testament to it’s nutritional qualities; I like to add turmeric and call it “Liquid Gold” since I basically feel amazing after slurping some down. Yesterday I started the broth and gave it a good 24 hours (alot of recipes say to simmer for up to 72 hours for maximum nutrient release, but I’m not that patient) to develop its flavors and to pull out all the minerals from the bones. The way I did it was: 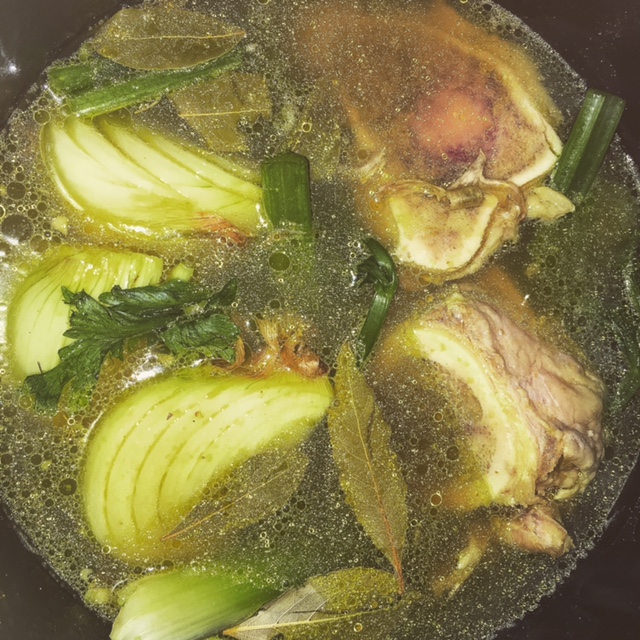 To start the broth, put bones in large pot and add water (I didn’t measure, I guess it was 8-10 cups of water). Add large splash of apple cider vinegar, a few Tbsp worth, and let soak for 30 minutes. Add all other ingredients (including 2 of the onions — save the other one for now) and bring to boil. Cover and turn heat down to low and let simmer for 20-24 hours (doing this in a slow cooker seems much more efficient, but mine is packed away). Remove veggies and bones; strain broth through strainer and set aside. When cooled, remove solidified fat from surface. Meanwhile, chop and cook kale until very tender (I just put it in a large pot with a little water and steamed it until tender). Chop and lightly crisp chorizo in pan; remove from pan and let drain on paper towel, removing excess grease (WARNING: you may want to hide cooling chorizo; husbands love to pick at this when you’re not looking and may not leave enough for the soup). Chop 1 onion and sautee in chorizo fat; sprinkle with large handful of flour, creating roux. Add a little broth to pan, stirring ’til smooth — this will help to give the soup some body. Add chorizo, kale, and thickened onion mixture to bone broth. Add water if you’d like more soup. Season to your liking (I used 2 T turmeric for a little nutritional boost, 2 T black pepper, and sea salt to taste). Let simmer on low for about one more hour. Drain and rinse white beans; stir into soup… that’s it! Now, all you need is some good bread to dip it in (or, not).